Going to scale refers to a process to extend community level change through:

There are several approaches to going to scale. In fact, “scaling up” has become a buzz word within the field of international community development. These approaches differ from SEED-SCALE in the degree to which they give communities ownership of the change process and allow for rapid expansion with adaption at the the local level. These approaches are summarized:

Additive Approach to Scale: One bottom-up community project is done and then another one is added. Process driven by non-government agencies. Benefits one local community at a time and is often dependent on outside-in support and resources.Blueprint Approach to Scale: Refers to a centrally designed project sent to communities to implement. Standardized top-down solutions with little community involvement. Often has poor sustainability and has great dependency.Explosion Approach to Scale: Large and temporary focused efforts preferred by donors for crises or single intervention activities such as mass immunizations or food intervention. In this case, both the solution and implementation are brought to communities. The resource and management demands are met at the expense of building infrastructure and community capacity.Biological Approach to Scale: The SEED-SCALE process follows the biological approach to scale. It grows from community conditions and adapts to fit ecology, economy and values. Successful communities in one area develop the self reliance and capacity to be regional training centers for neighboring communities. Exponential growth occurs in regional niches as the network of training centers expands to teach more communities.

Going to scale with SEED-SCALE

SEED-SCALE permits success from one community to expand (or “scale up”) quickly to other communities. SEED-SCALE allows successful development to spread, exponentially, and even simultaneously, across many communities. This process of “going to SCALE” facilitates a rapid yet site-specific expansion of community progress that remains sensitive to local ecology, culture, and economics.

The SEED-SCALE process uses the word “scale” as an acronym, SCALE, to describe this process at different levels. You will see the letters of this SCALE acronym change meaning with each dimension or level of action.

The three dimensions of going to scale are:

represents the local level. SCALE-One is community specific. SCALE-One refers to the increasing confidence and sophistication of services that occurs within a community as it builds upon its own successes. 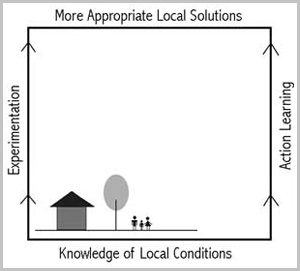 represents the inter-community (or multi-community) dimension of our process. SCALE-Squared refers to the way successful communities can share their experiences with other communities in the same region, in both formal and informal ways. Our SCALE-Squared process transforms clusters of communities that have already experienced developmental successes into formal Action Learning and Experimentation Centers to show others how they too can succeed. At the SCALE-Squared level, there is a certain amount of experimentation to adapt existing solutions to each local area, plus the all-important process of one community teaching others through hands-on action.

refers to the large-scale implementation of community-based action, on a national or large-region scale. SCALE-Cubed involves the creation of larger systems to promote the extension of developmental successes throughout whole re 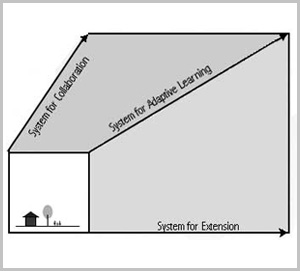 When the right enabling conditions exist, societal change can spread through a region like wildfire, taking hold spontaneously in multiple places. When only partial enabling conditions exist, change will spread but only arithmetically, participating communities joining in but only a few at a time (2, 4, 6, 8, 10, 12…). In a more complete enabling context the spread of change becomes exponential (2, 4, 8, 16, 32, 64, 128…) Simple observation of the world shows that change is occurring at different rates in different communities. As we learn more about how to create the defining enabling environment, the challenge for each community will be to select its desired rate of change, and then to control the direction and limits of this change. 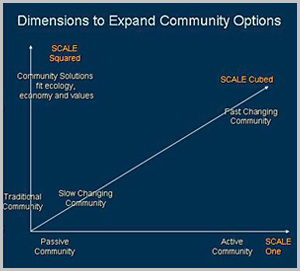 Sometimes SCALE-One change starts first. And change at this level seems spontaneous. A community encounters new ideas that work and adopts them. At other times SCALE-Squared begins the process of change and development as, for example, when demonstrations are started by experts at an Action Learning Center and then people are trained in the process. Such demonstration projects at the SCALE-Squared level can be powerful and effective. Launching community change through SCALE-Squared can be very cost-effective, especially when it is necessary to evolve the specific pattern of solutions while extending them. Alternatively, the process may begin at the SCALE-Cubed dimension. Here, government shapes the overall enabling environment of policy, financing, and support services to stimulate innovation, allowing it to begin in multiple locations at the same time. There is no one a priori formula for stimulating social change and development. Most likely all three dimensions—SCALE-One, SCALE-Squared and SCALE-Cubed—will be involved to some extent in a successful regional development program, the mix varying with the time and place, the culture and resources of the communities involved. 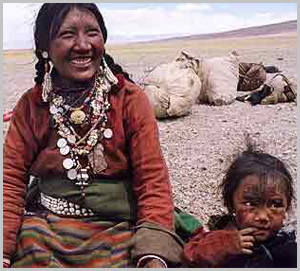 From 1982 to 1995 maternal and child health services in China used this “going to scale approach.” Pilot projects in ten counties with four million people were the initial experimental and teaching sites (SCALE-Squared.) Then, with an enabling framework of SCALE-Cubed type systems, twenty more counties were added, then 85 more counties, then 300 more counties, to finally reach a total population of 160 million people. Using this process a county-specific pattern resulted that fit local needs.